SportsReach (www.sportsreach.org.uk) started as CSIL back in the late 80’s when the founder Graham Stamford was challenged to combine his two passions of football and faith in the Lord Jesus Christ.  He got two teams together to play a game of football and at the end of the match shared the Good News of the Gospel with them.

In 1990 SportsReach was then founded and became a registered charity in 1997 (No. 1065723) and since that point the work has multiplied many times over.  Our offices are at Carnforth, Lancashire and this is where our men’s football league, 5 aside league and ladies netball league are run from.  We also have a ladies football team and a classics (veterans!!) football team. Each team is linked with a local Church and has Christian leaders who will share a Gospel message at each game.

During the spring and summer we organise soccer (7-14 years old) and netball (9-13 years old) schools around the UK.  Always working alongside local Churches wherever we go, our aims are to give the children quality coaching and competitions as well as sharing the gospel.

As well as all this SportsReach takes football teams (both men’s and women’s) and coaching teams out into Europe as well as North America and Africa.  In the Dachstein Valley in Austria, where SportsReach have been taking teams for 18 years we are known as ‘the joy people’.   We always share about the reality of our faith in after game presentations as well as giving out Bibles and literature where appropriate.

SportsReach’s motto is ‘Reaching the world for Christ through sport’. 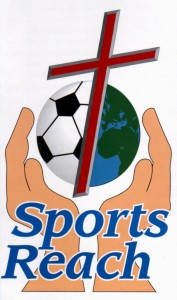