Linvoy Primus was 26 when he moved to Portsmouth FC, a club struggling in the second tier of English football. He had previously been playing out his career in the lower leagues for Charlton, Barnet and Reading, with his footballing and personal life unfulfilled as he struggled with a crippling lack of self belief that had been fuelled by rejection,

Linvoy’s fortunes were to be changed in a remarkable way when he decided to commit to Christianity. This book tells the story of how he believes his faith in God transformed his life and performances such that he played a key role in Portsmouth’s triumphant ascent to the top level of the English game and went on to become a top Premiership footballer, scooping a host of awards from the fans along the way.

Off the field he has become a popular figure in the community with his tireless work for the disadvantaged youngsters through his charity ‘Faith and Football’, and he also tells the stories of his own fascinating overseas missions to help vulnerable children in Nigeria and India.

This is a compelling story of Linvoy’s own remarkable conversion and his subsequent life as a Christian footballer in the Premiership.  This enjoyable and readable book, which will also appeal to non-football lovers, is highly recommended.

The book can be ordered from the following address:

Orders, with the name and address included, should be accompanied by a cheque made payable to ‘Faith and Football’ for £9.99 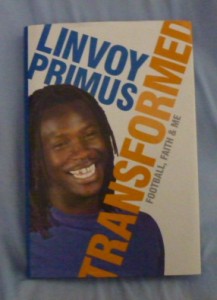 “If you love football then you will really enjoy reading about the real life of a professional footballer at the highest level. The way players are treated by clubs, the insecurities around having contracts extended or ended, being told you can leave to go to another club when you don’t really want to – maybe it’s not all as glamorous as it seems from the outside? But then there is the playing against Rooney, Ronaldo and in the best stadiums in the country in front of thousands. Linvoy explains his feelings through all those situations and also shares how he came to faith and how this helped him throughout his professional career. It’s a great read.” – Mark Blythe